At Last Pass we have many things to be thankful for. Family, friends, land owners and wonderful hunters! We are truly blessed! From our family to yours... Happy Thanksgiving!!!
Posted by Last Pass Guide Service, LLC at 8:14 AM

Last weekend we had two different groups that were able to come out and take advantage of the new geese that came into town recently.  Friday we had the opportunity to help a young boy harvest his first goose!  He did an outstanding job both in shooting and also handling his gun safely.  Friday was a fun hunt with good people.  We had a good amount of decoying birds Friday and the guys had a great time shooting.

Sunday the hunters decided to hunt the afternoon instead of waking up to early and it was a great idea by the way the pile of dead geese looks.  Once again we had a father and son hunting with us and once again we had the opportunity to help a kid harvest his first goose!  The smile that was on this kids face was priceless and hopefully he continues helping us harvest geese in the future!  The guys finished Sunday afternoon with eleven geese but could've probably finished out their limit but chose to end early while the geese were still flying.

Monday brought the first white blanket on our field and I went out to one of our fields and shot my 3 geese in less than 10 minutes.  And that includes setting decoys!  A very quick set up (5 doz black and whites) and even quicker shooting!  With Mondays and Tuesdays cold temps we saw a good push of new geese into town.  I'm not going to lie... Tuesday morning was brutally cold! I was out duck hunting and it was 9 degrees out.  Everything was froze solid! 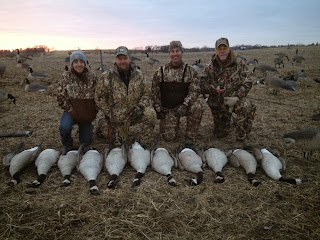 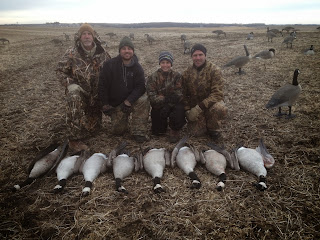 ﻿
The hunting is really heating up and we still have plenty of season left to get out and shoot some geese!  Give us a call and we'll get you out after some of these Rochester Giants.
Chad Foster﻿
Posted by Last Pass Guide Service, LLC at 2:16 PM