Spring is in the air and its one of the most enjoyable times for me and my family.  We took full advantage of hitting all our secret moral mushroom honey holes!  This spring was a good one for us mushroom hunters with wet and cool temps keeping our spongy friends around for well over three weeks.  Besides eating the scrumptious mushrooms, the best part of the season for me is being able to take Kelton and Aubrey out with me.  This year Kelton was a mushroom machine with any spare time we had he wanted to be out in the woods looking for the next motherload!
This summer I plan on putting out more blogs with the other outdoor activities we take part in during the long off season.  Keep checking back and we will have some up soon about fishing and our turkey seasons!
Also just an FYI for all our hunters...  Memberships will be due by August 15th this year.  Any questions on them feel free to call me or Bryce.  After last years unbelievable hunting, we have a lot of interest in memberships but last years guys have the first dibs on them.  If they decide to forfeit the membership it will be offered to the first person on the waiting list.
Also its never to early to get your snow goose dates down in the book for the 2016 spring season.  We've already had numerous groups book their weekends so hurry and get ahold of me or Bryce to reserve your spots for "the greatest waterfowl show on earth"!
Have a great summer and before we know it, it'll be that wonderful time of year when we wake up to a cool crisp morning with a stiff NW wind and canadas back peddling in the decoys! ﻿
Kelton Picking A Good Cluster 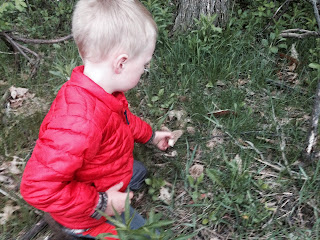 We Picked 72 Mushrooms Around This Tree! 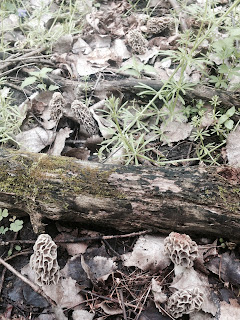 Kelton With His Find Of Perfect Morals 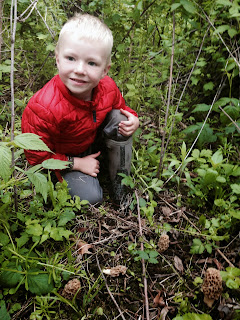 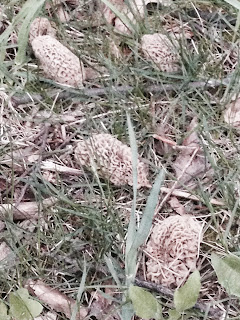 His First Harvested Mushroom.  He Found It And Picked It All On His Own! 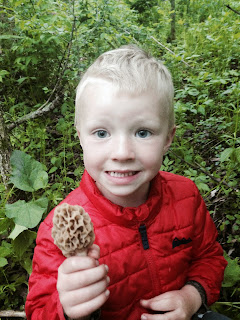 A Beautiful Sight To A Mushroom Hunter 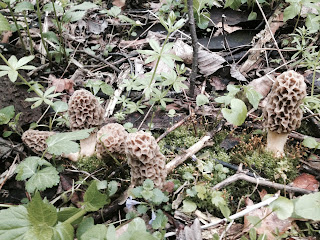 The spring snow goose season could be described as challenging this year in Missouri.  Once again we were reminded that mother nature has the last say in how our hunting goes.  Our "typical" start up date for Missouri had to be postponed a couple weeks because of a late snow and cold front that came through the Midwest.  We weren't affected with much snow but just south of us got blasted a couple different times and that put a halt on the migration for a couple weeks.  Once the weather changed for the better and we had warm temps, the birds pushed hard and we had 2 weeks of good hunting.  The temps were phenomenal after week one with everyday in the 70's and sunny with a good wind.  Everything we ever want and hope for when we are chasing snows!  The only problem with the temps that warm was the geese were able to keep pushing north with no snow line to hold them back.  I was amazed at how stretched out the migration was this year.  We thought it was spread out last year but that was nothing compared to what we saw this spring.  I had good friends killing geese in southern Arkansas and other friends killing geese in northern North Dakota all on the same weekend!
The beginning of the season for us is always exciting and is always a grind to get decoy stakes in the ground and blinds stubbled.  This spring was tougher than normal since we had to use a drill bit to help us get through the frozen ground.  It was brutal setting up our first 4 decoy spreads!  Bryce and I are lucky enough to have some guys that really bust their butts to get the job done.  Bob, Mike and Charlie worked their tails off and we can't thank them enough!  Even when the huntings tough, and the weather sucks, these guys just have the attitude to get the job done and we appreciate that.
Obviously with us hunting as much as we do in the spring, we see some pretty cool things.  I'm trying to remember some of the neat things we saw or experienced this spring.  I'd have to say that this year we dealt with more coyotes than in any other spring that I can remember.  Every field lost geese to coyotes and there were some days we lost multiple birds.  On one hunt Hawk couldn't retrieve the glided birds fast enough and we lost 5 snows to yotes!  It's very frustrating when you rain a flock of geese and one glides 300 yards and you watch a coyote come out of a tree line or waterway and grab it and race back into the brush.  Last Pass did get even a couple times with the coyotes.  The first run in happened when Charlie was guiding and his group glided 3 birds besides the ones they dropped in the decoys.  Charlie was walking along a little brush line on his way to the first downed bird when he startled a coyote out of the brush.  To bad for the coyote, Charlie has fast reflexes and was able to halt the dog in his tracks!  The other "getting even" story was with me and my dog Hawk.  We also were out picking up geese throughout the field when one of the snows took flight and flew into a thick waterway about 70 yards away.  Hawk was on it and me and one of the hunters from that day walked towards where we saw the bird go into the waterway.  We were standing there talking when we saw a white dot bouncing through the weeds.  We figured it was Hawk with the snow but then we saw a coyote come out of the waterway with the goose!  Then it dropped the bird because Hawk was a mere 5 feet behind and was chasing the coyote and nipping at its heals!  I'm glad I had another hunter there to see this otherwise no one would ever believe this story!  Hawk chased the yote for about 100 yards and then turned around and returned to the snow, grabbed it and brought it back to me!   ﻿
Bryce and I would like to thank all our hunters that decided to come and hunt with us this last spring.  It was fun seeing all our old friends and meeting a bunch of new ones!  We know you have many choices on who you can hunt with and we feel privileged that you choose us.  Thank you to everyone and we look forward to hunting with you all again this next spring!
The Boys Getting Gear Out On Another Field.  Lots Of Drilling Decoys In The Ground.  Notice The Generator In The Pic?  That Thing Is A Life Saver And A Time Saver! 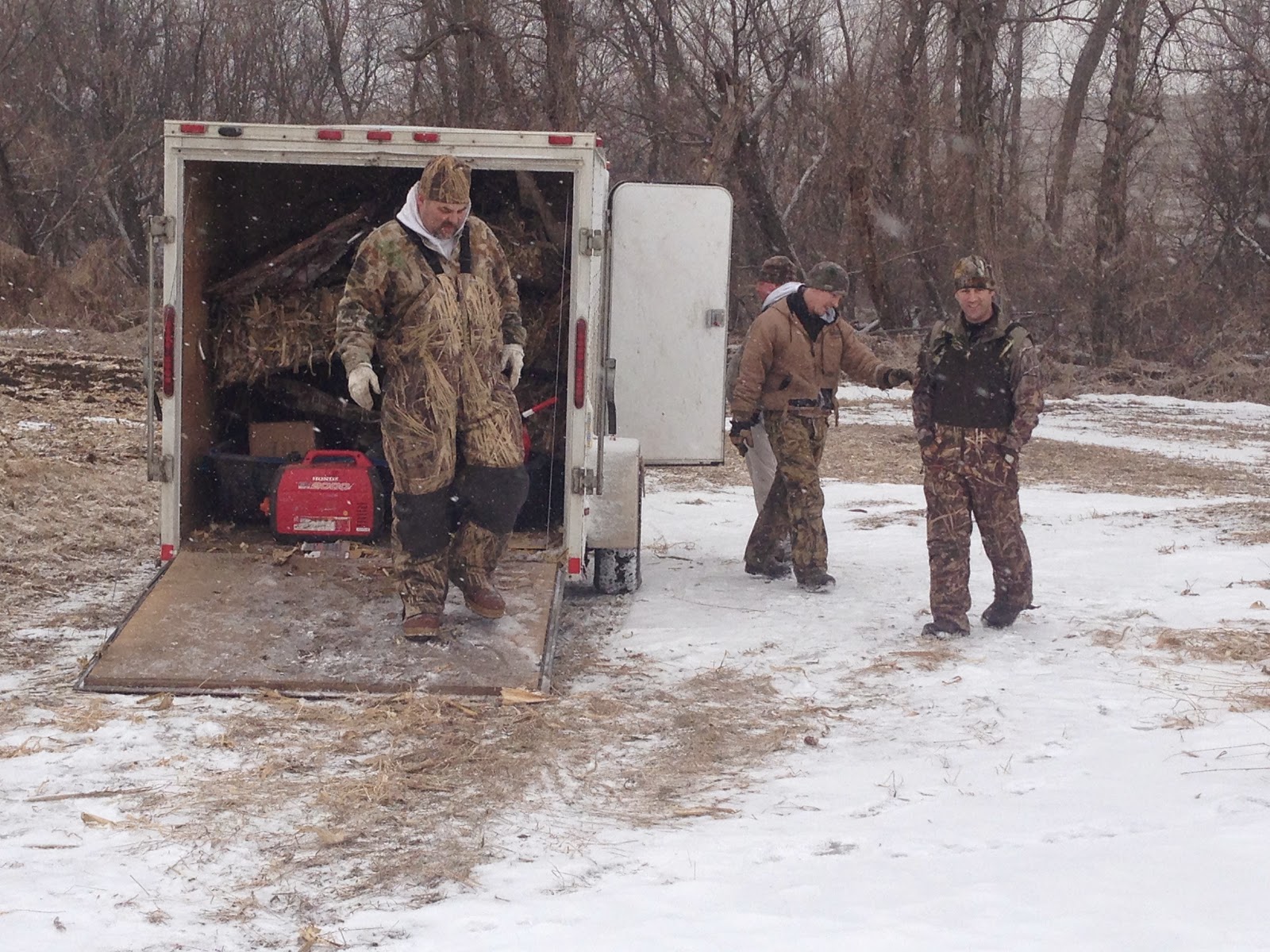 Hours And Hours Of Drilling!  Bryce Runs The Drill And Mike Sets The Decoys. 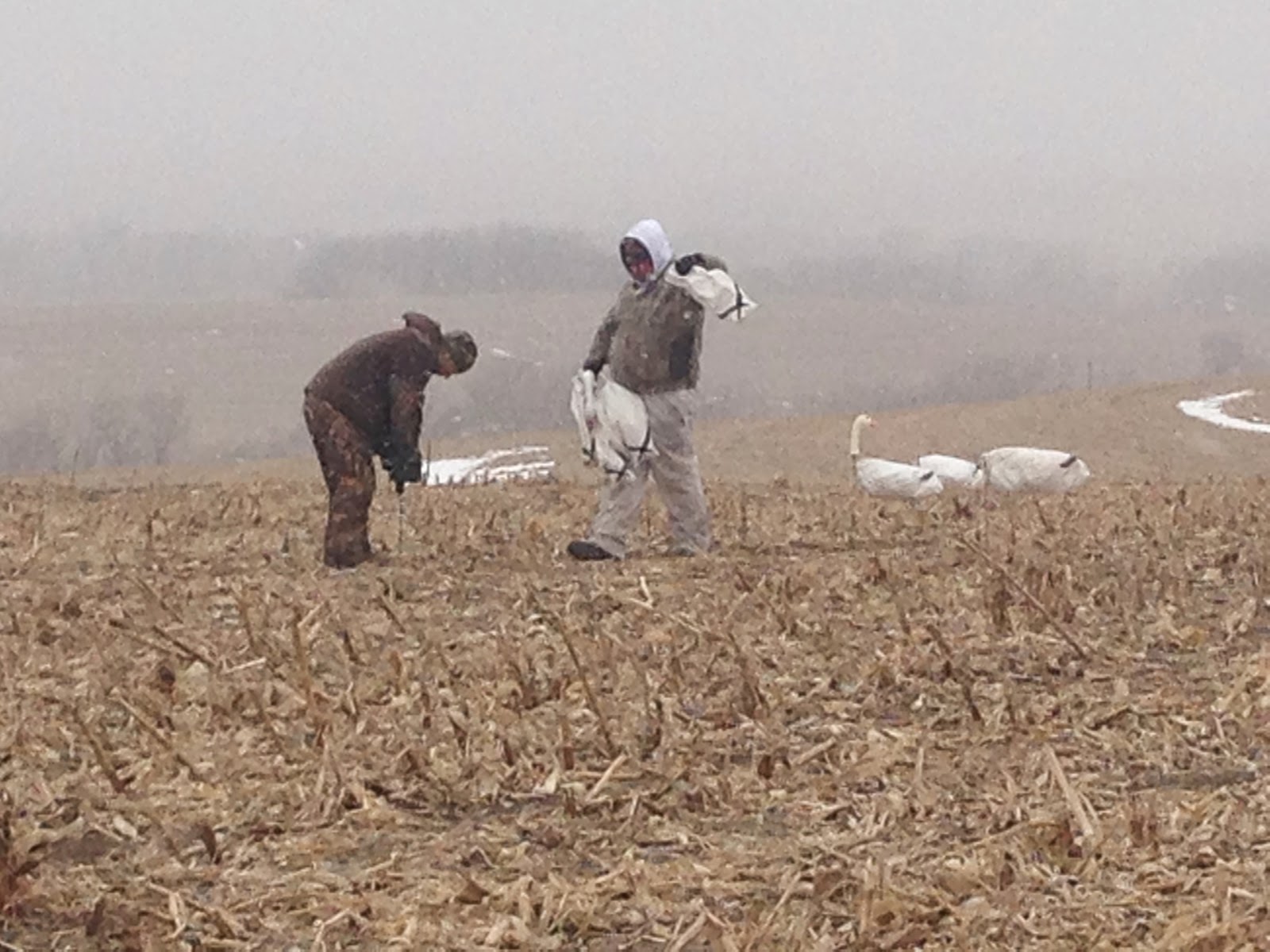 A Good Afternoon Shoot With A Fun Group Of Guys 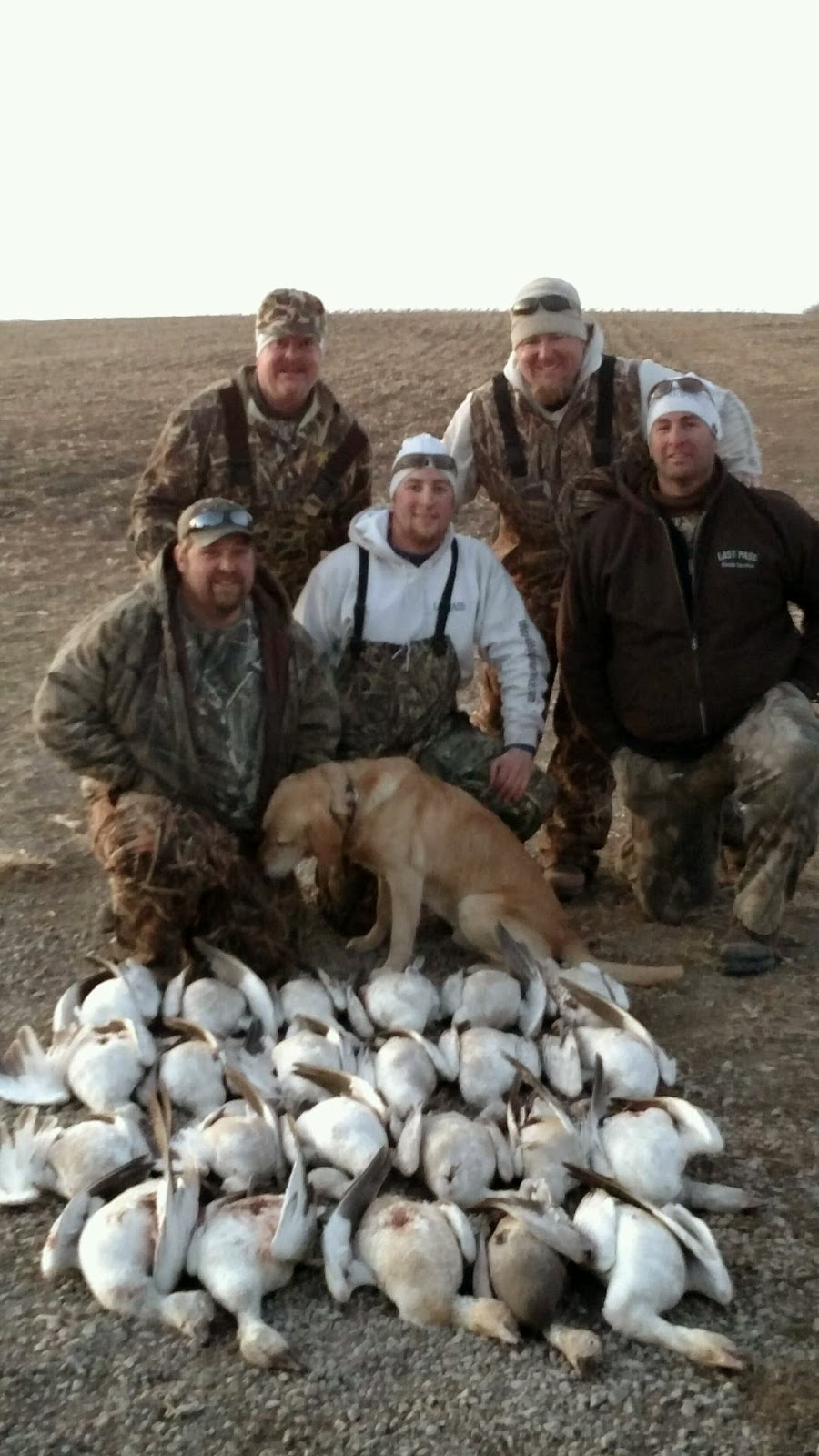 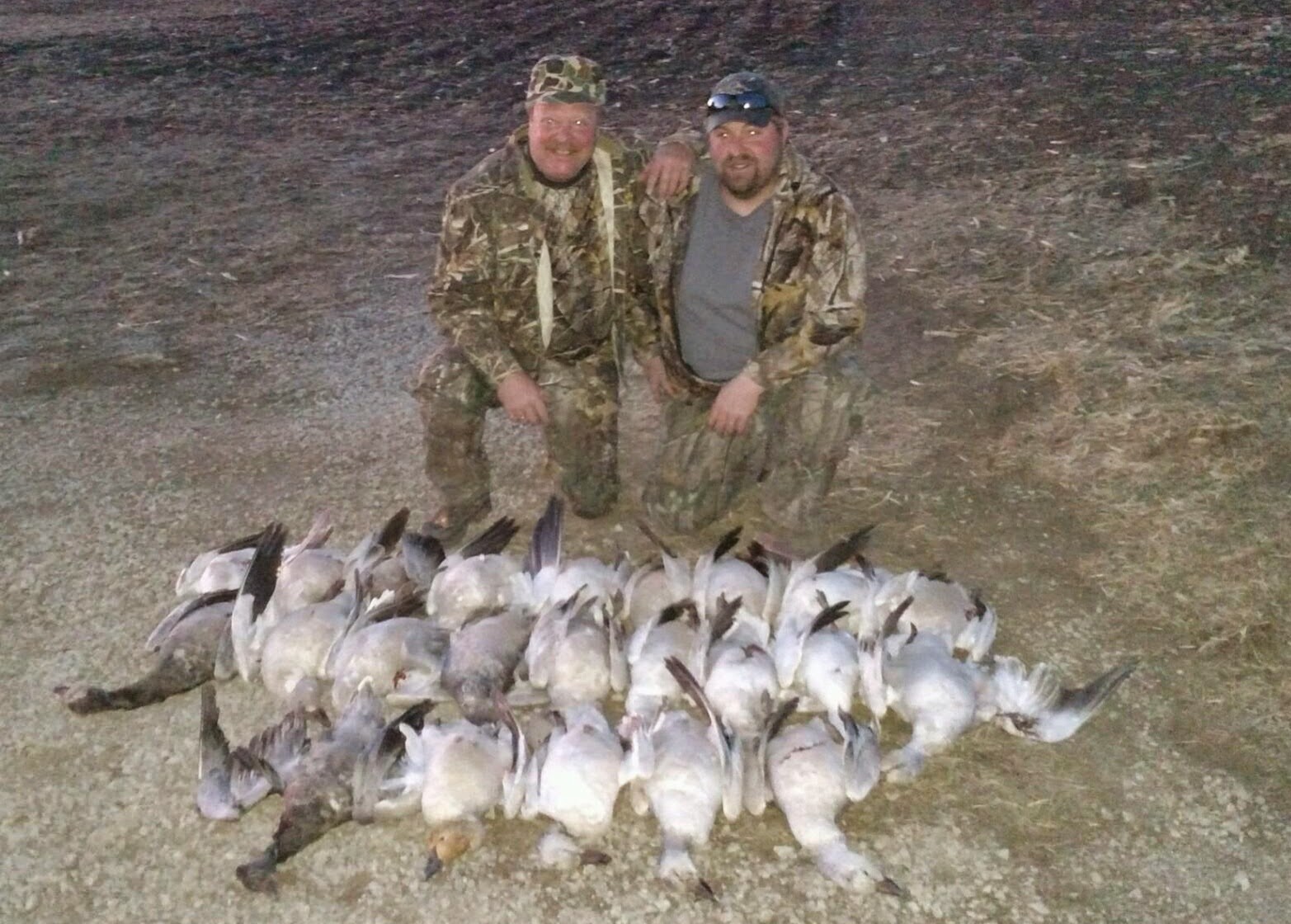 All These Geese Were Harvested Within 25 Yards!  The Wind Was Whipping At 20+ MPH So We Had To Let The Geese Get In Tight. 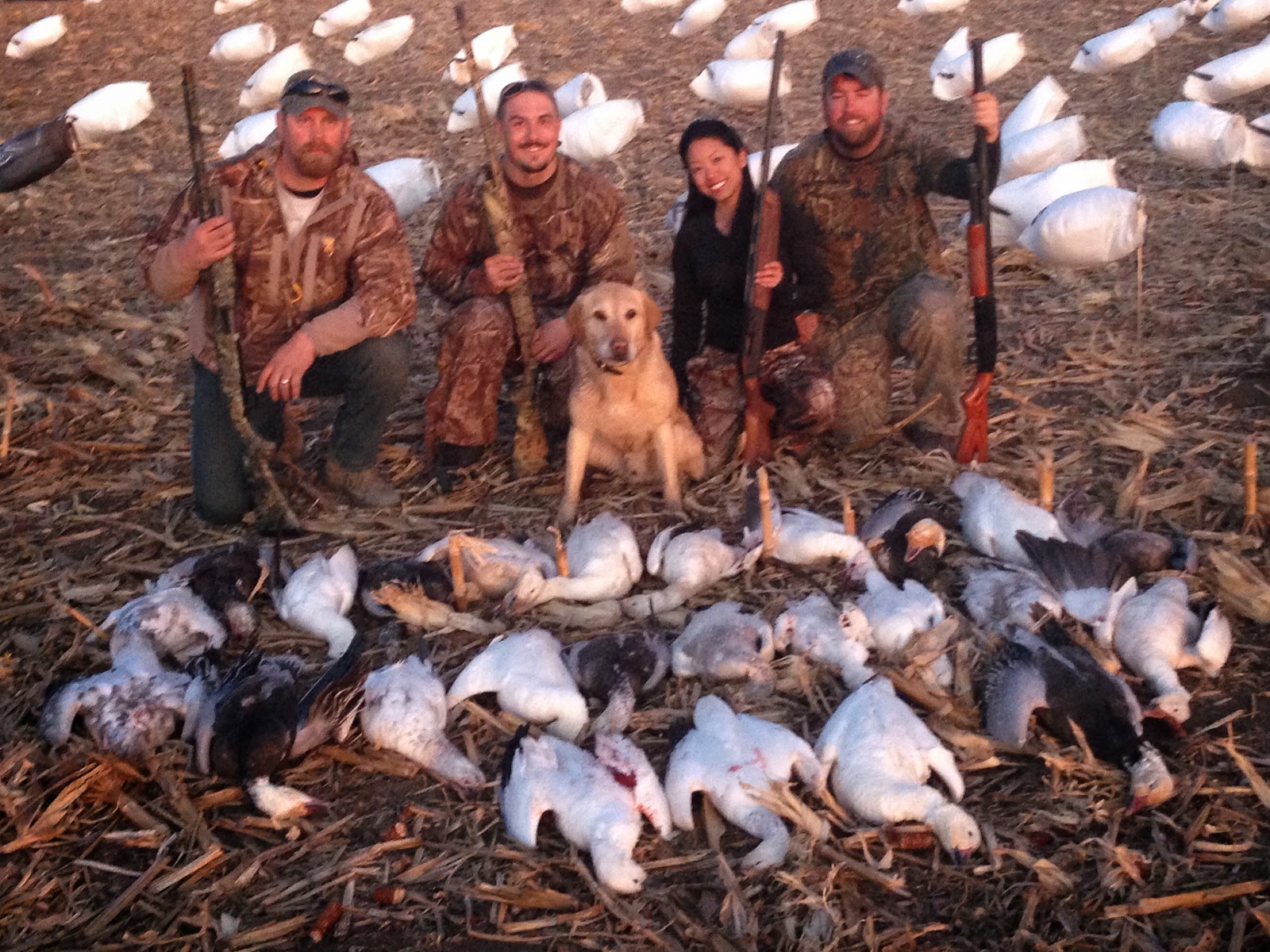 One Of Many Flocks This Spring That Worked Down Into The Boot Bags! 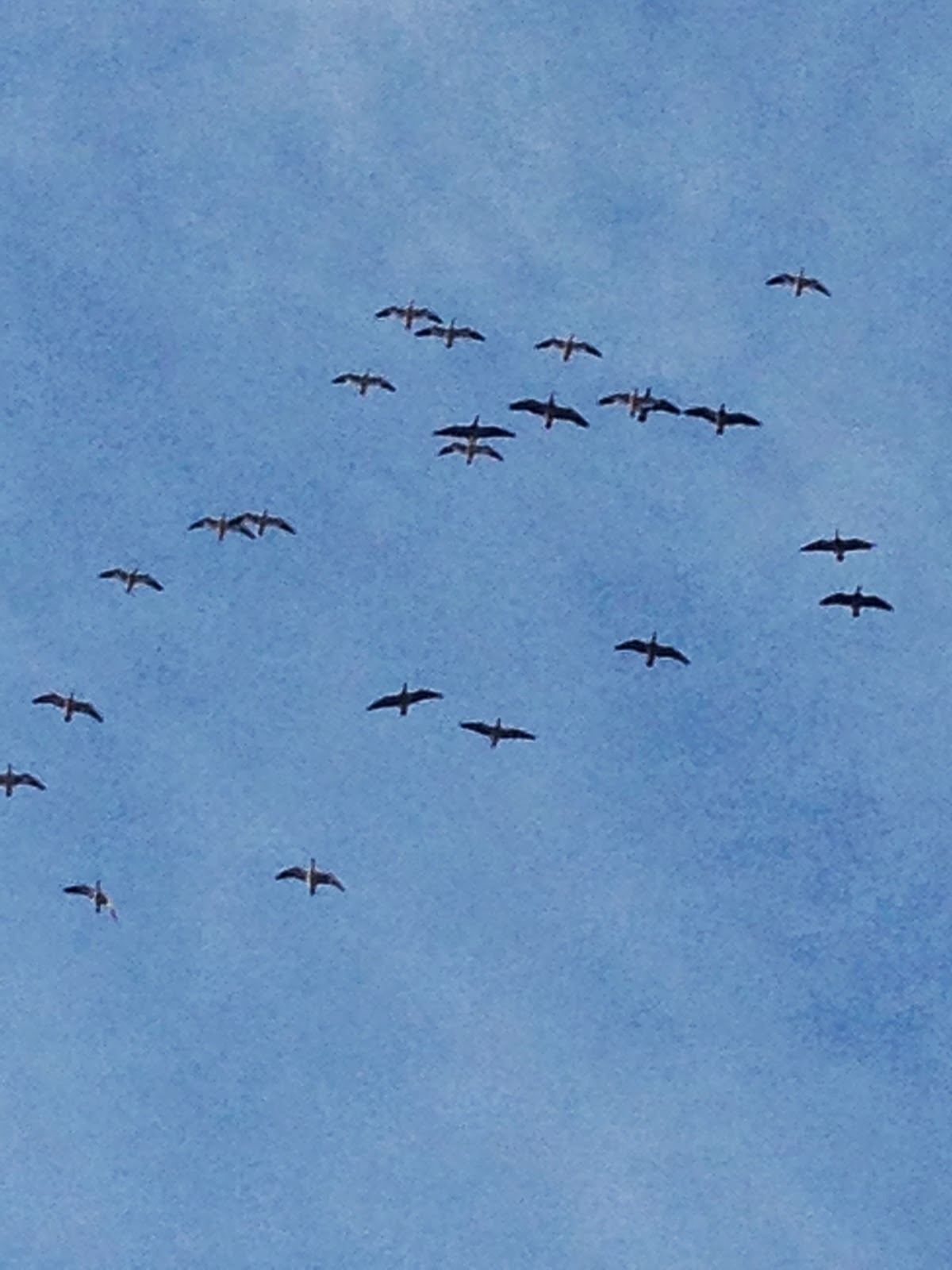 This Hunt Was Amazing To Say The Least!  We Had One Of The Biggest Spins I've See In A Long Time.  There Were Geese Coming Into The Tornado From Miles And Miles Away 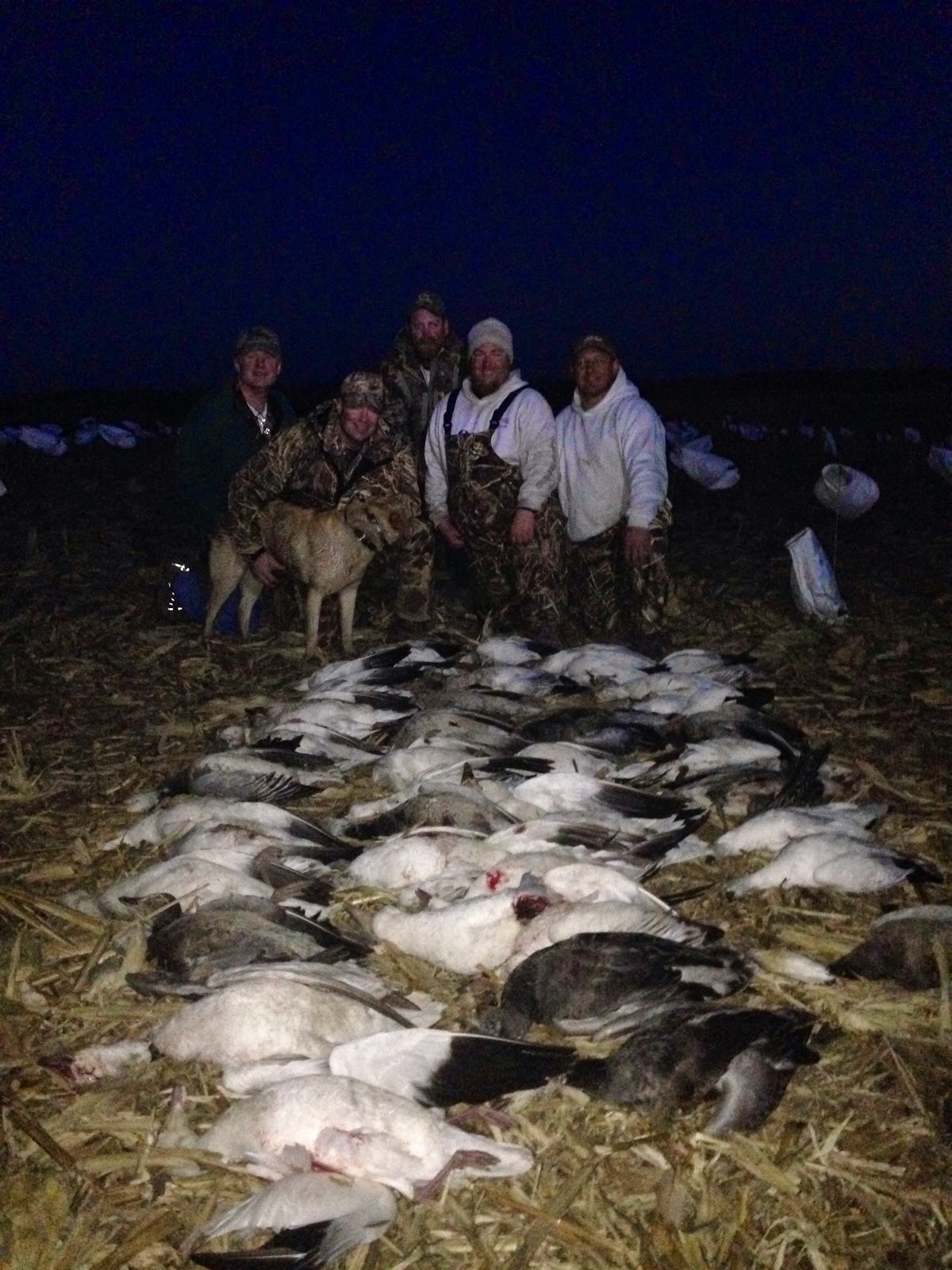 Charlie With The Mornings Take.  It Might Not Be The 100 Bird Shoot That Everyone Wants But These Guys Were Having The Time Of Their Lives And That's What Its All About.  Even When Hunting Was Tough These Guys Enjoyed Themselves! 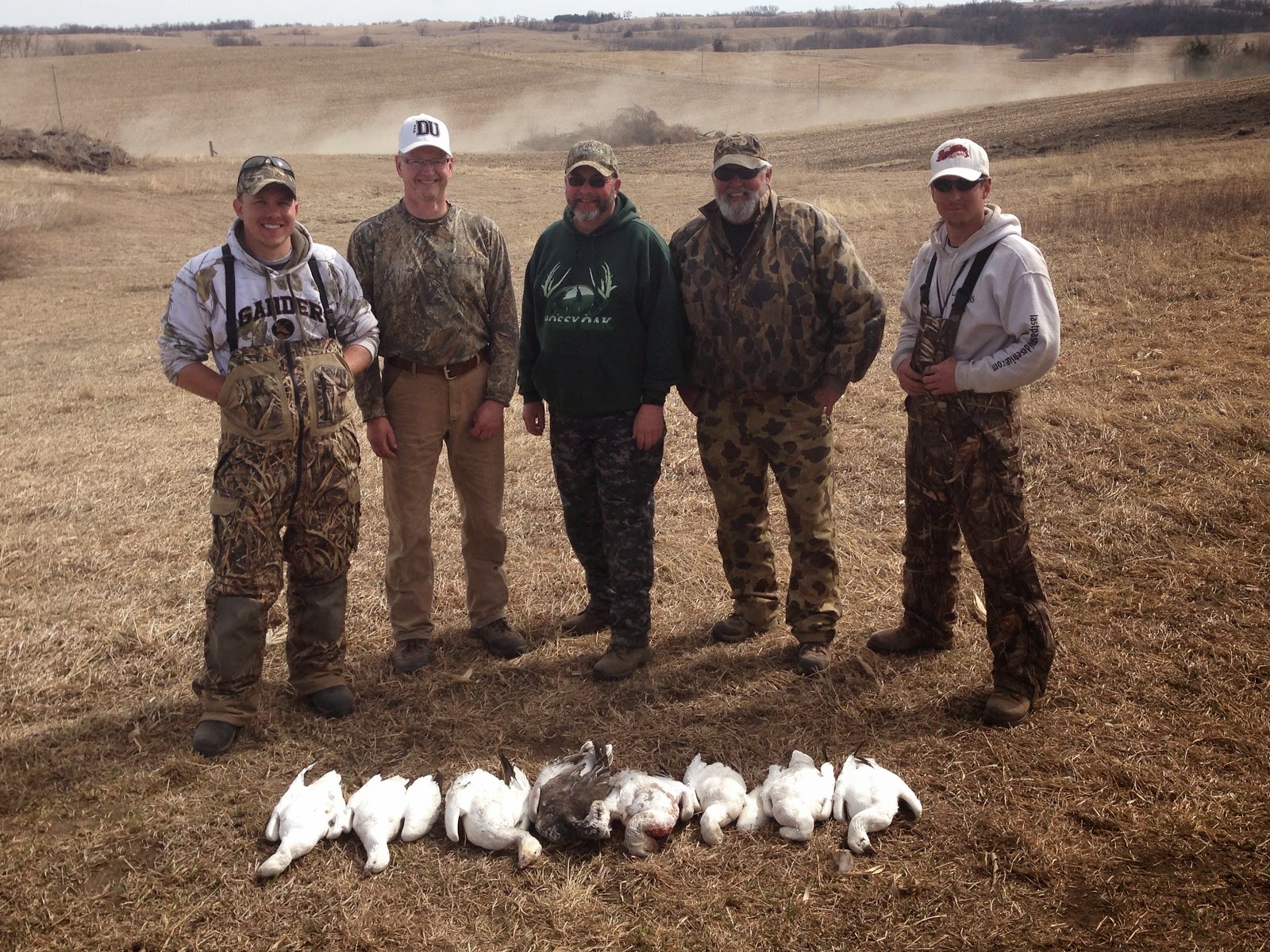 Hello Juvies!  Welcome To Mound City!  Unfortunately Your Flight North Has Been Cancelled!!! 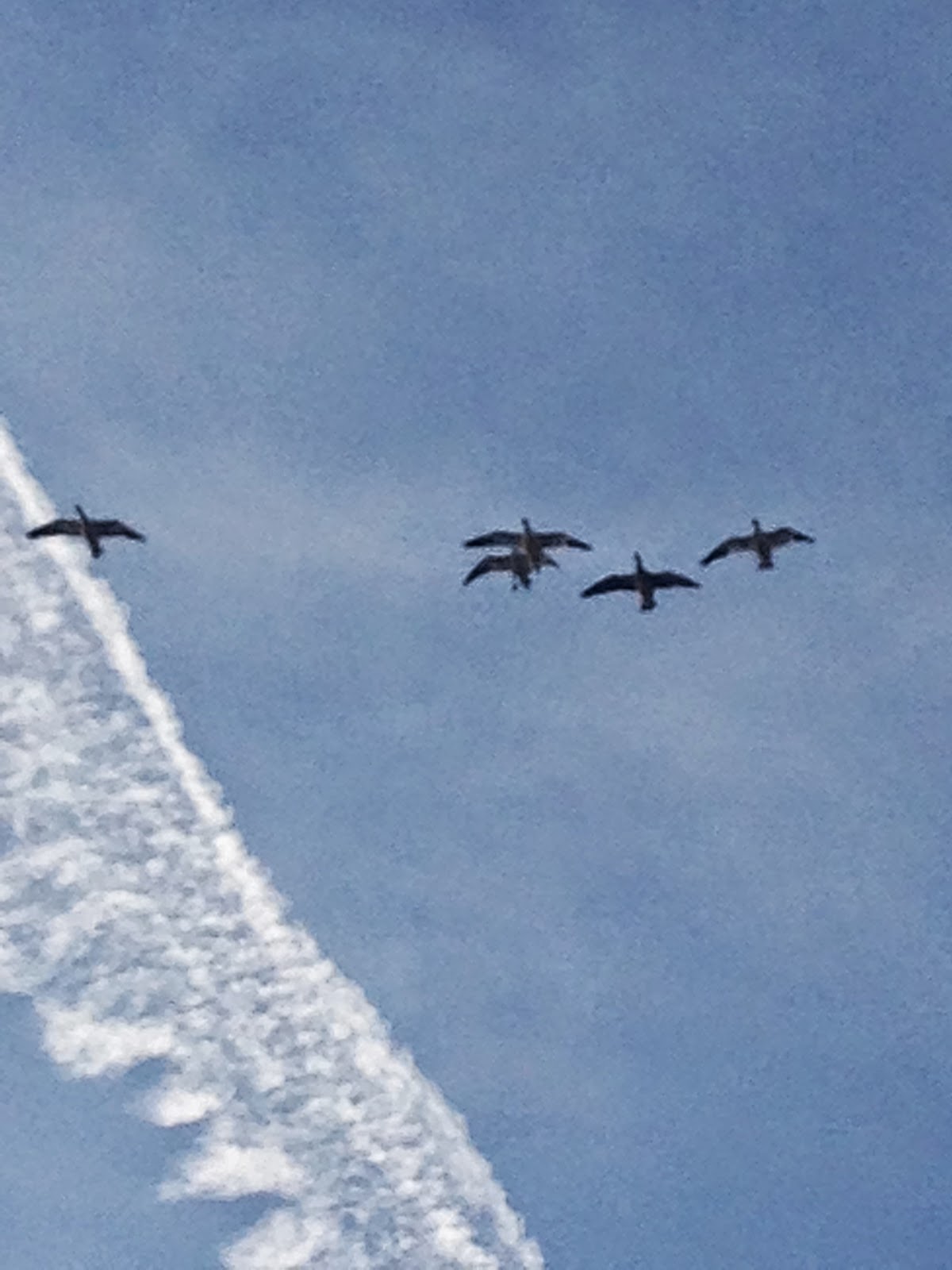 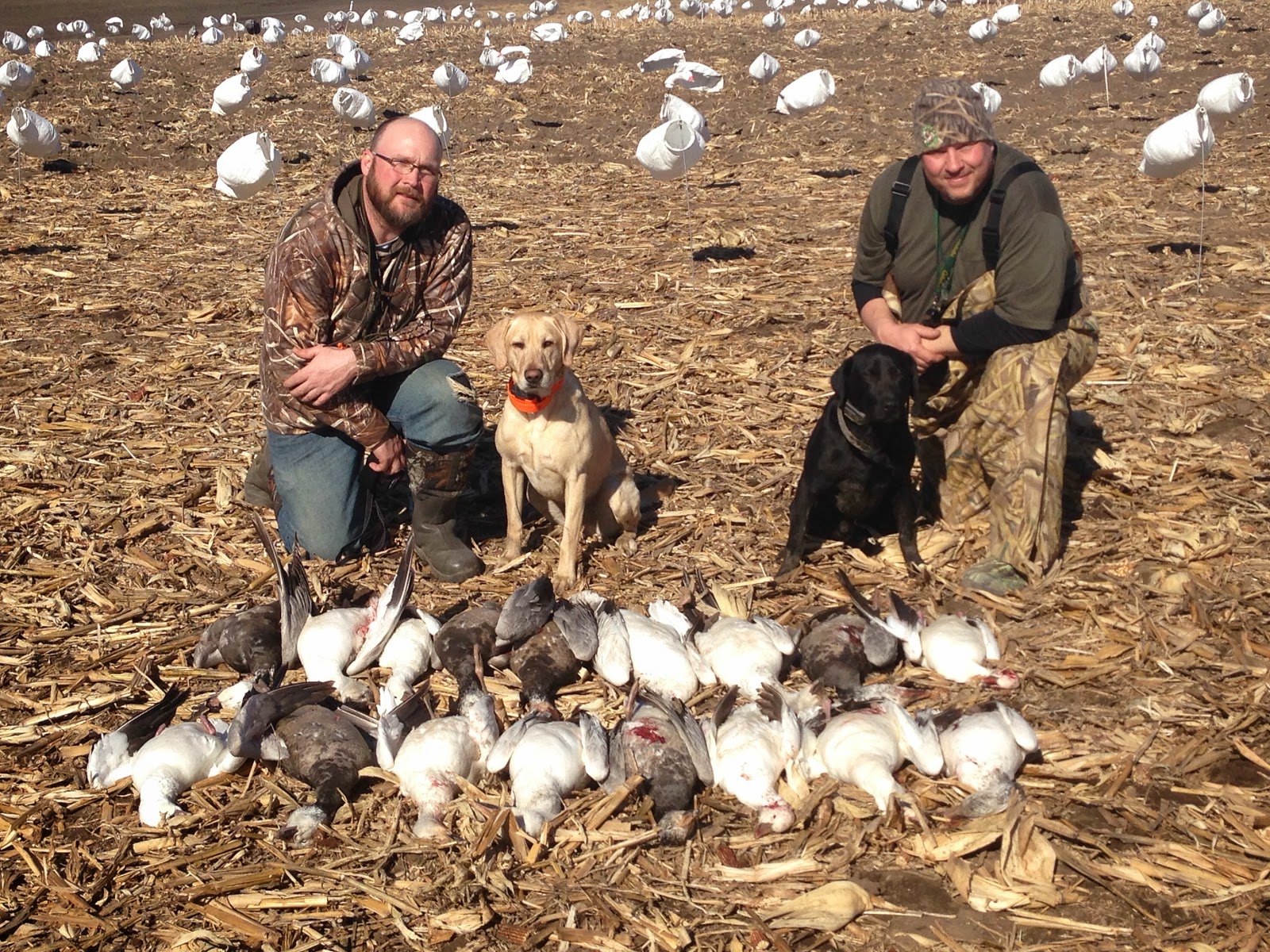 Do You Think Missouri Is A Flyover State For Planes?  I Loved This Pic Because Of The Sun Setting, The Planes And The Geese Flying Through 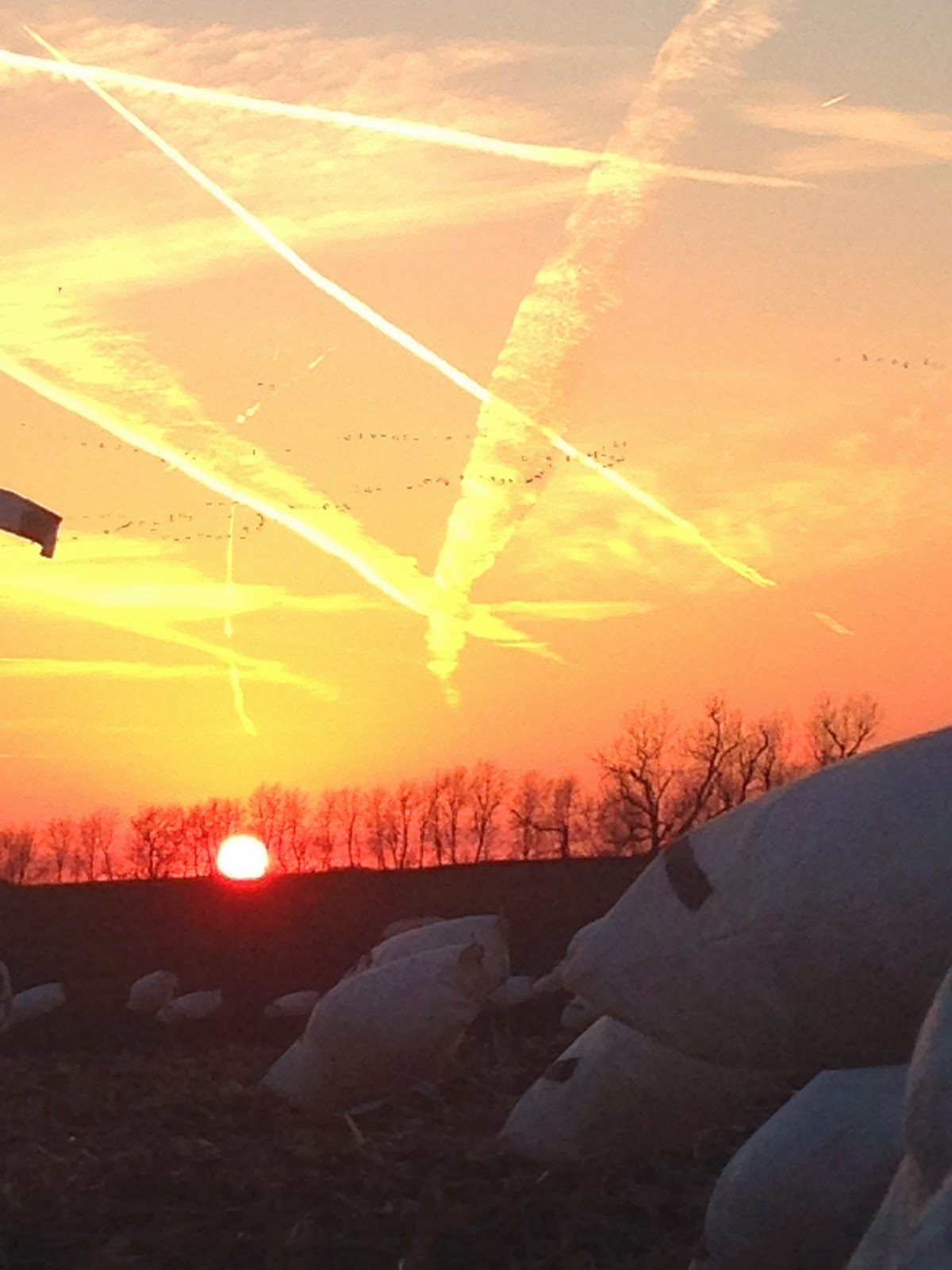 Hawk Enjoying A Water Retrieve On A 75 Degree Day 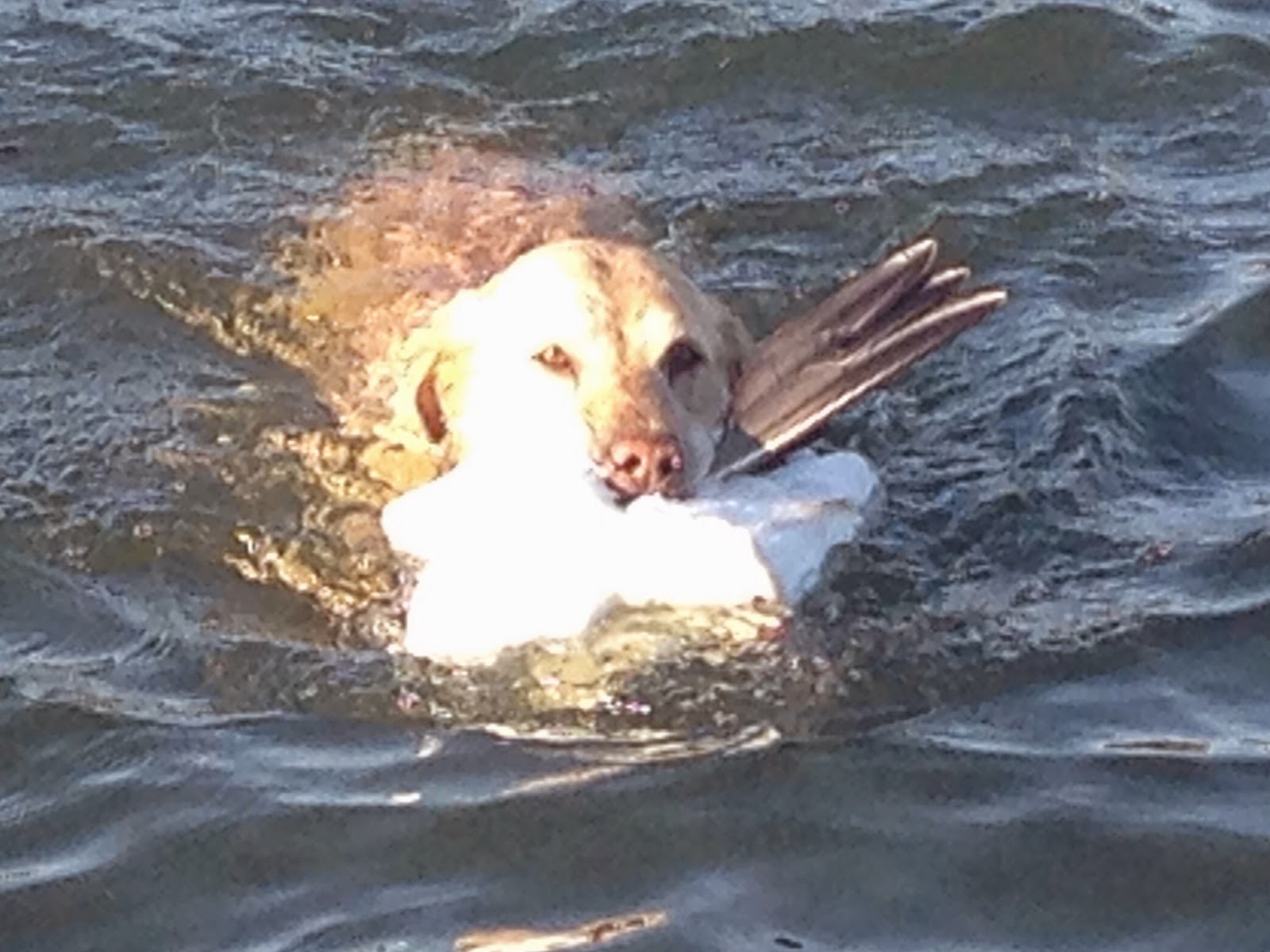 The Chad With A Morning Haul.  Chad Has Been Hunting With Us Since The Spring Of 2010 And He Is A Blast To Have In The Field.  He Just Loves Being In The Field, Taking All The Sights And Sounds Of The Spring In.  Plus When We Have A Good Rainout Its Awesome To See How Jacked Up He Gets!!! 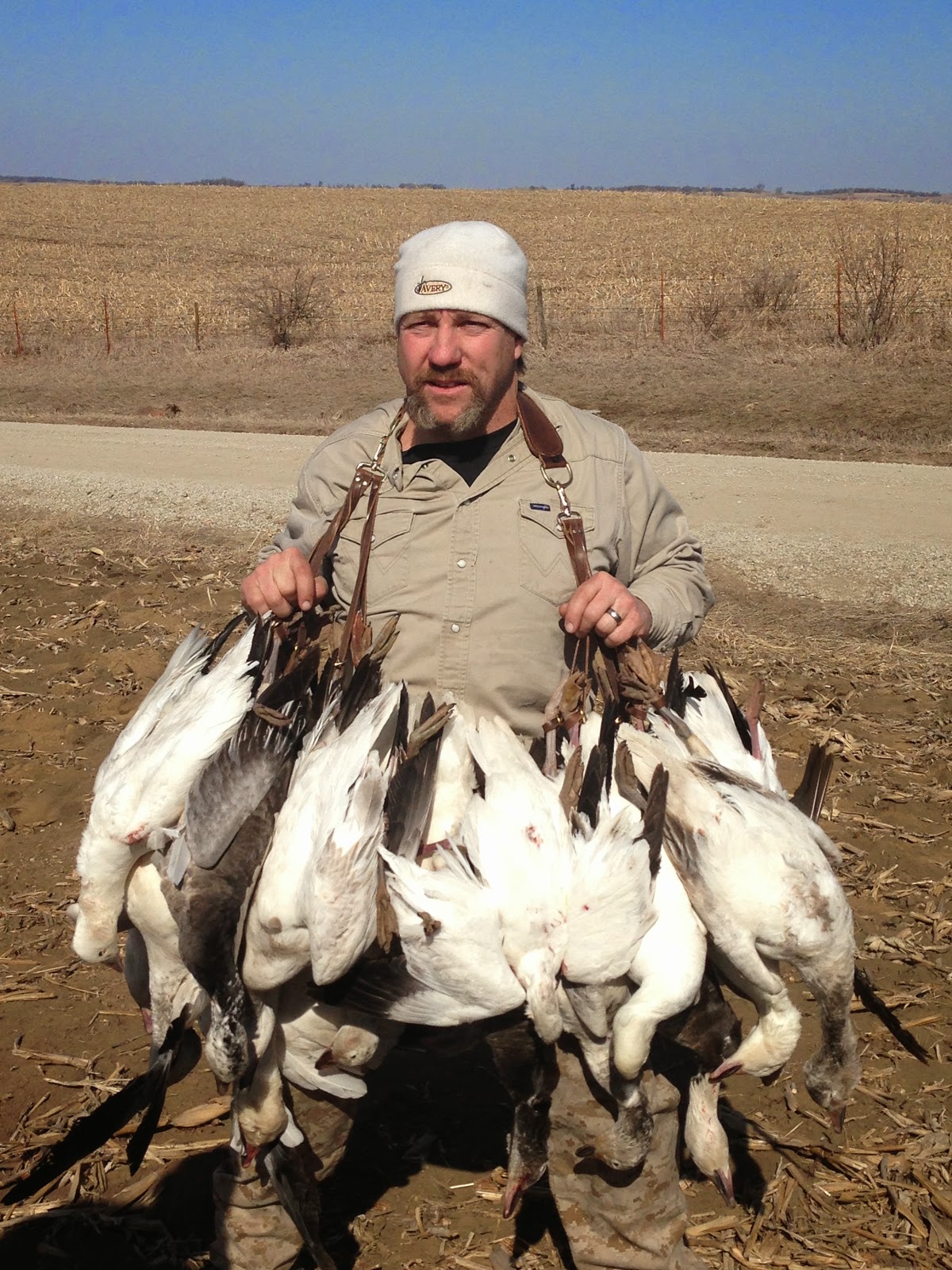 Hawk With A Banded Snow 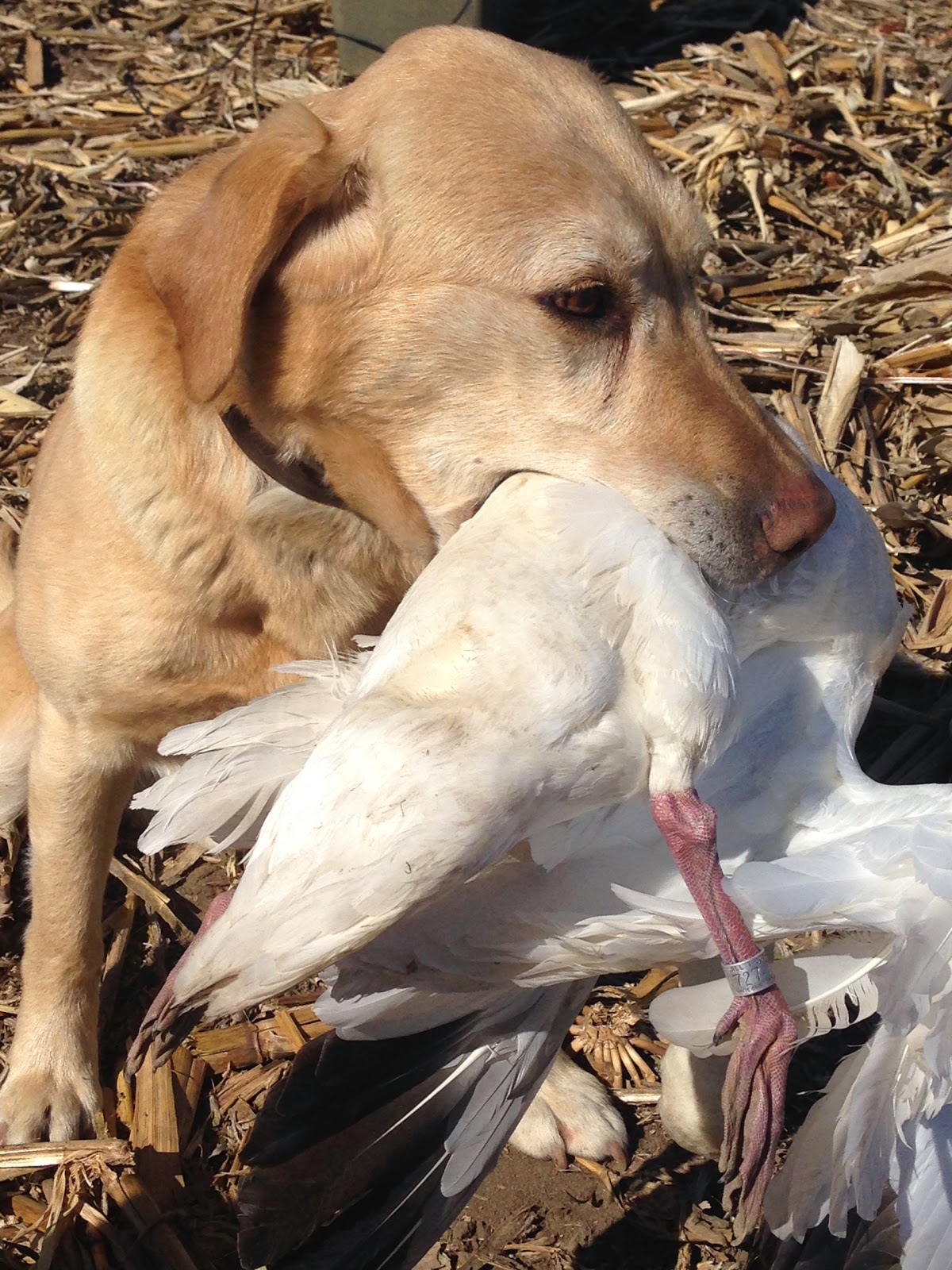 Get Ready Boys, Here They Come!!! 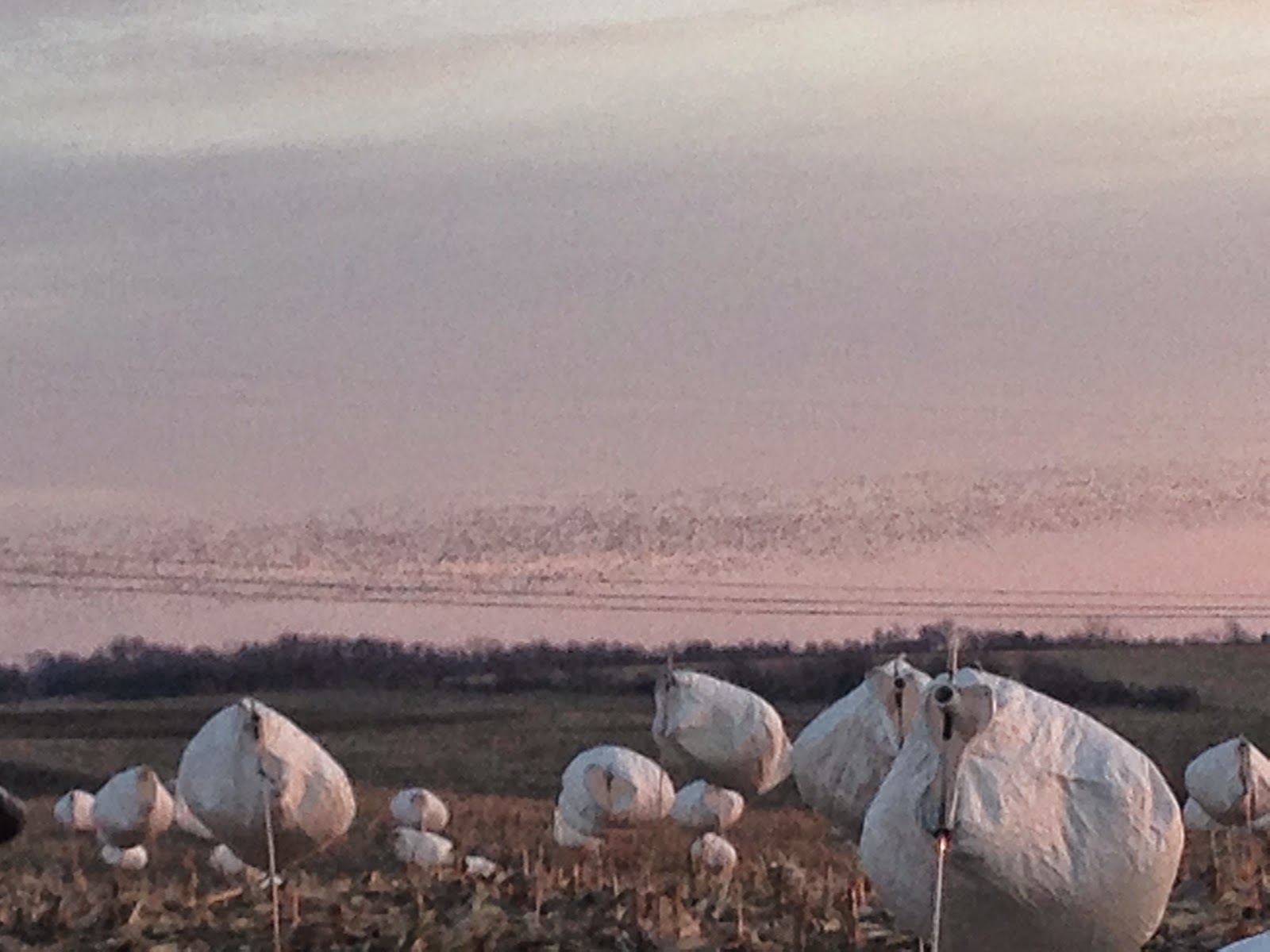 That's A Wrap!  Time To Head North And Call It A Season.  Thanks For The Memories... 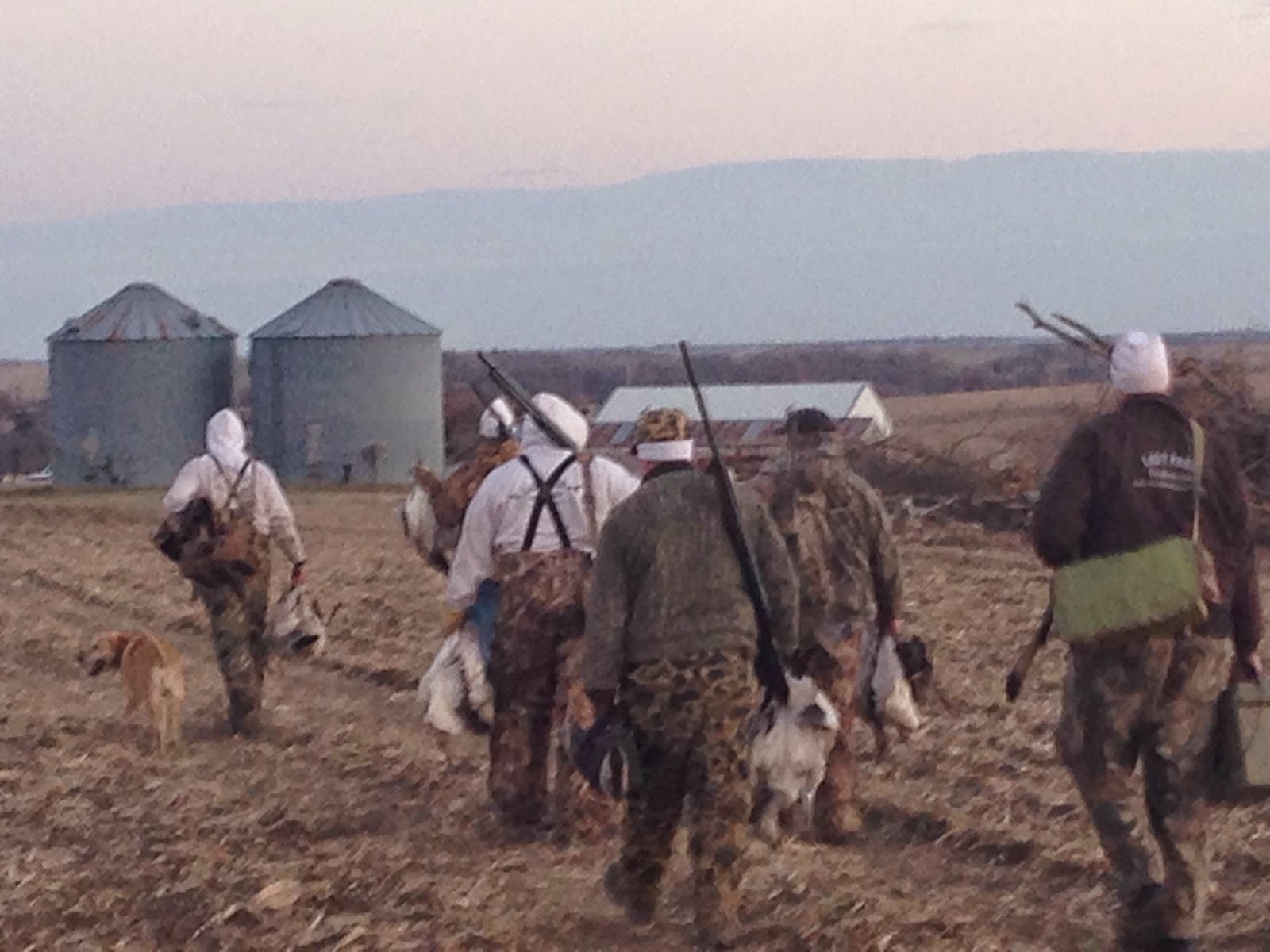