We had a couple more fun hunts this week.  Tuesday 3 of us went out and set up on a loafing spot and waited for them to come back from the fields.  It was a fun hunt trying to coax the geese in to a spot they typically don't hang out at.  Our marksmanship needed work on this hunt with everyone shooting holes in the sky!  Oh well, it was still a ton of fun.  Plus it was 92 degrees so picking up decoys in shorts felt phenomenal!

Thursday 2 of us hunted a sweet corn field and shot 9 in a hurry.  We decided to pick up and get out of the field instead of shooting the 10th and final goose.  With the goose movement this morning there is no doubt in my mind we would've shot the final goose but we chose to let the geese get in the field and save it for another day.

We had the first 4 geese of the morning work right in to the kill hole and we knocked them all down.  We were all smiles when Hawk brought them back one by one and all 4 were banded!  It made a great hunt even better!

Check back on the Blog this weekend as we look forward to knocking down a pile of canadas.  We'll be out chasing them so hopefully they get the memo and show up in big numbers.

The phone and emails are starting to come inquiring this years hunting, and also 2014 spring snows.  We did sell another membership this week so we only have a few left for this fall.  Don't put it off another day.  Call ASAP to get your money down on one of these.  Trust me you won't be disappointed. 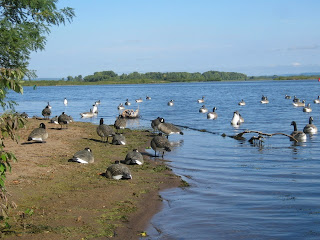 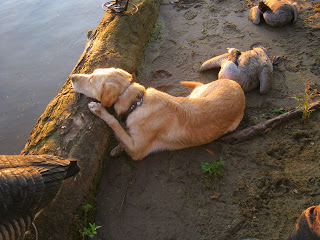 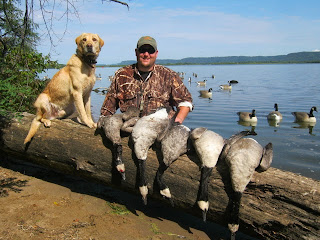 Hawk With Another Canada To Add To The Pile 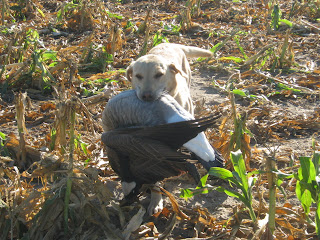 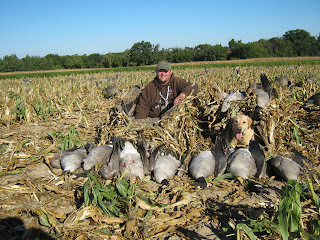 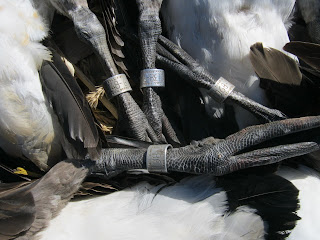 Early season FINALLY is upon us and we are out chasing the big canadas.  The season started for us on Sept 1st down in the SE area of the state.  Of course August was beautiful weather with highs in the low 70's but like clock work the week before we could hunt the temps shot up to the 90's.  It made for some tough scouting but in the end things seamed to work out.

Opening day found us in a cut sweet corn field.  The birds were typical early season birds with a few flocks short stopping us in our field and also a couple flocks coming in with the wind.  Young birds just don't understand that they are suppose to land into the wind and finish in the kill hole!  We did have some nice finishing birds and the 4 of us were able to take 12 on the morning hunt.  It didn't help that all the geese came at once.

Monday was totally opposite of Opening day.  We only saw about 25 geese but were able to harvest 9 of them.   It was a slow and weird day with no bird movement.  The only explanation is that they were pushed off their roost and flew off in the opposite direction.

Just a reminder that the regular season is right around the corner.  We have been taking calls and booking people this last week.  There are a lot of good days left but they will be filling up fast.  We have a few memberships still available.  Give me or Bryce a call and we can hook you up with one of them.  Its a great deal for a guy that wants to hunt a lot but doesn't have the decoys or fields to do it in.  Basically you can hunt whenever we hunt!

Also we are starting to fill up the weekends for our 2014 spring snow goose season.  I say it every year, but hurry and reserve your groups spot before its to late!  We always have a group that misses the dates they want and are bummed out about it.  Don't wait! 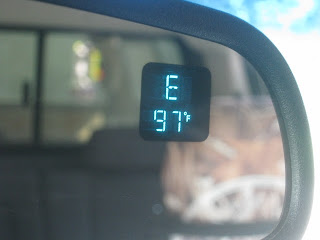 Scouting in 97 degree weather is a new one for me!  Glad I had air conditioning in the truck and didn't have to hunt in this heat.  Sunday was hot enough in the low 80's!﻿ 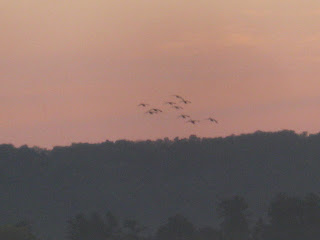 An early morning flock that finished perfect for us!  I look forward to many more of them this year. 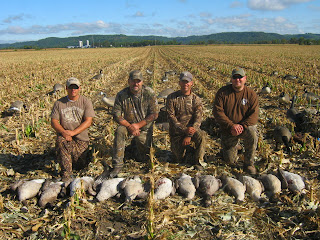 Dave, Bob, Bryce and Chad after a good hunt
As a lot of you know early season gives us the chance to hunt with family and friends since most of our guiding doesn't happen until October through December.  Bryce and I take advantage of September to get our kids out as much as we can.  This last weekend I was able to take Kelton out on his very first hunt.  It worked out great because we could hide in a cut corn field and it was an afternoon hunt with good weather.  To be honest I didn't take him out there to watch me shoot a limit of birds.  In fact I had a flock of 15 and another flock of 5 come in to the decoys and I never even shot.  He is only 2 and the "hunt"﻿ was all about him.  He liked setting decoys, eating snacks and hanging out with his buddy Hawk!  When the flock of 15 came in I looked at him and he told me that he shot 2 out of the flock!  I was one proud dad out there!!!
﻿ 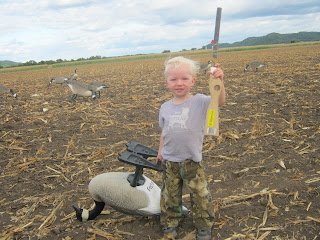 Kelton and His pop gun! 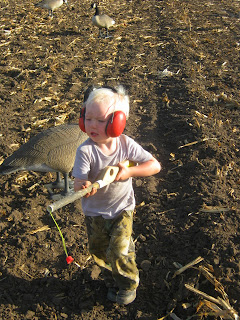 Kelton Having Fun with his Pop Gun and Ear Muffs 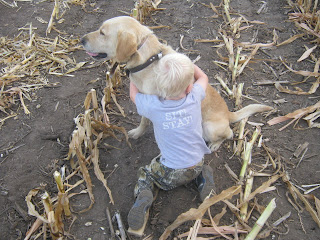 Kelton and His Buddy Hawk 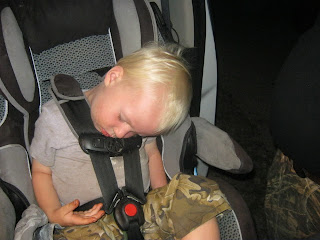 Wiped out after the hunt!!!